An invitation to join the Inverness Branch for a Trafalgar dinner was accepted by four from our branch S/m's Kenn McKinnon, Anne Cox and Brian MacKenzie and his good lady Irene. Members from other branches also attended and we all had a great time. We even fought the battle of Trafalgar at the dinner which was fun. All in all a very good weekend.
Posted by R N A. CHAIRMAN/P R O at 05:35 No comments:

Two of our members were invited onboard the SS Glenlee AKA the Tall Ship by the captain of HMS Glasgow. S/m's Eddy Pollar and Alex Thomas attended and a good night was had even though they had to abandon ship twice due to faulty fire alarm.
Posted by R N A. CHAIRMAN/P R O at 05:34 No comments: 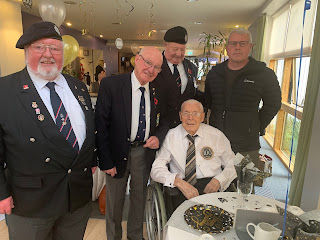 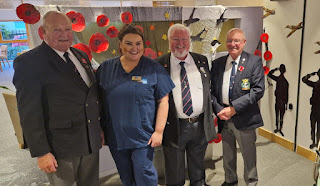 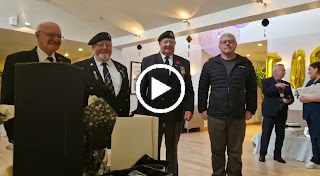 Three of our members Kenn McKinnon, Alex Thomas and Eddy Pollar were invited to join the staff guests and residents of David Walker Gardens Care Home to celebrate AB Gordon Cowan's 100th birthday celebrations. David served onboard HMS Capel, Zanzibar and The Queen Mary and more during World War Two. The Provost of Rutherglen presented David with a card from the King and a good bottle of whiskey this was followed by entertainment from a singer and the company enjoyed dancing to the songs. It was a lovely afternoon with plenty of food and drink for all.
Posted by R N A. CHAIRMAN/P R O at 07:32 No comments:

On Saturday 24th September we visited the Lindore Abby Distillery in Newbourgh. It is the oldest recorded distillery in Scotland which was run by monks who made Aqua Vitae spirit King James the forth supplied them with a substantial amount of barley to make a supply for himself. The Abby was raised to the ground during the reformation. It has been rebuilt and is now producing a lovely malt whiskey and Aqua Vitae spirit which is infused with spices and fruits which gives it a distinctive taste. Well worth a visit.
Posted by R N A. CHAIRMAN/P R O at 05:15 No comments: 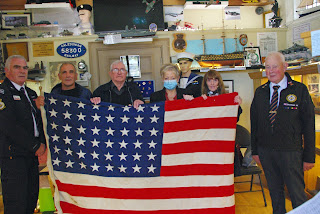 The City of Glasgow RNA were contacted by the family of a Medal of Honor recipient with a view to laying up the flag that covered his coffin with a museum. S/m Kenn McKinnon chairman of the branch made arrangements with the Armed Forces Veterans Association to receive it at their museum in Dumbarton Central Station, room 2 on platform 2. On the 20th of September Graham Houston great grandson, Mary Houston great grand daughter, Marilyn McDermot great grand daughter and David Houston great great grandson handed the flag over to Tony Barr and Hugh Doohan of the Veterans Center. Francis Kelly Francis Kelly was born Archibald Houston in Anderston, Glasgow, Scotland. He enlisted in the US Navy from Massachusetts, and served as a watertender in the collier USS Merrimac during the Spanish–American War. Kelly was one of eight volunteer crew members when Rear Admiral William T Sampson ordered Merrimac sunk to block the entrance of Santiago Harbor, Cuba. On the night of 2-June 3, 1898, during the attempt to execute this mission, Merrimac's steering gear was disabled by enemy gunfire, and she sank without obstructing navigation. Her crewmen were rescued by the Spanish and made prisoners-of-war. After the Battle of Santiago de Cuba destroyed the Spanish fleet a month later, Kelly and his shipmates were released. For his actions during this operation, he was awarded the Medal of Honor. Francis Kelly remained in the Navy after the Spanish–American War, ultimately obtaining the rank of Chief Machinists Mate. He returned home to Glasgow, and died there in 1938, his death certificate states "Archibald Houston (formerly Francis Kelly), US naval pensioner". He is buried at Sandymount Cemetery, Glasgow, Scotland. Medal of Honor citation Kelly's official Medal of Honor citation reads as follows: In connection with the sinking of the U.S.S. Merrimac at the entrance to the harbour of Santiago de Cuba, June 2, 1898. Despite heavy fire from the Spanish batteries, KELLY displayed extraordinary heroism throughout this operation.
Posted by R N A. CHAIRMAN/P R O at 07:18 No comments: 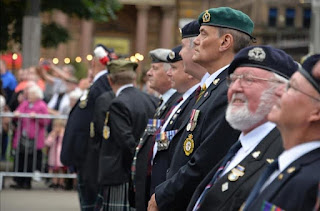 On Sunday the 11th S/m Kenn McKinnon, Brian Mackenzie and Alex Thomas were invited to attend in George Square, Glasgow for the ascension of King Charles 111 ceremony. S/m Brian Paraded our standard.
Posted by R N A. CHAIRMAN/P R O at 04:30 No comments:

On 2nd of September Brian and myself were invited to attend merchant Navy Day in Paisley by councillor Lorraine Cameron the Lord Provost of Paisley. After the service we were invited to the Abby for afternoon tea. S/m Brian paraded our standard.
Posted by R N A. CHAIRMAN/P R O at 05:21 No comments:

At our meeting on 18th S/m Alec Thomas Vice Chair presented S/m David Carlin with a small keepsake and S/m Kenn McKinnon Chairman presented him with a gold watch for his service as Treasurer for the past 26 years. It was the first time in 26 years that he was speechless. Many thanks for your service David.
Posted by R N A. CHAIRMAN/P R O at 05:20 No comments:

August Renfrew War Memorial On the 2nd August S/m's Kenn McKinnon and Brian Mackenzie attended the 100th anniversary and rededication of their war memorial. After the service we adjourned to the town hall for afternoon tea. S/m Brian paraded our standard. Old Sailor Visit We were requested by SSAFA for a visit to a George Combs an old MCM ton class sailor who is bed ridden with a stroke. Myself and Brian duly visited him at his home in Lenzie where we spent a good couple of hours talking to him and his wife. We will try and get him a visit to Torrance church for an afternoon lunch asap. VJ Day On the 13th Brian and myself attended at the Knightswood war memorial for a commemoration service. Brian paraded our standard and I laid a wreath.
Posted by R N A. CHAIRMAN/P R O at 10:00 No comments:

On Saturday 9th July 8 of our members had a Fish and Chip night at McMonagal's fish boat in Clydebank. The night went well and all had a good time and good food.
Posted by R N A. CHAIRMAN/P R O at 09:53 No comments: