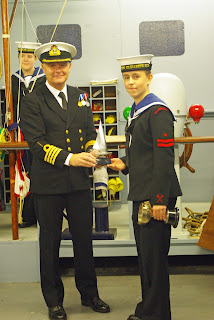 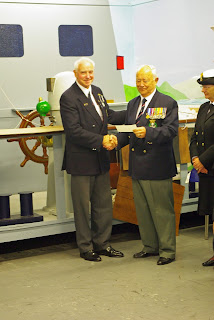 The committee were invited to TS Queen Elizabeth cadet unit in Clydebank for their inspection and prize giving. The inspecting officer was Captain Peter Adams accompanied by Commander Hugh Barris from HMS Scotia. The evolution was based on Nelsons victory at Trafalgar and the cadets did a splendid display with the death of Nelson particularly good. The evening ended with the prize giving and the RNA trophy went to the cadet of the year. S/m Brian Mackenzie presented a cheque on behalf of our branch to Lt Cdr George Troupe for the cadet funds.
Posted by R N A. CHAIRMAN/P R O at 12:14