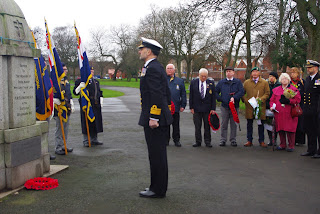 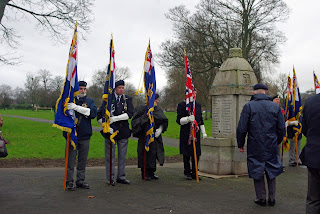 Copyright K McKinnon On the 26th S/m Brian MacKenzie (Standard Bearer) and Kenn McKinnon attended the commemoration service for the K13 Submarine lost with all hands in the Gareloch while undergoing trials in 1917. The service was held at the memorial in Elder Park, Govan. Rear Admiral Paul Halton OBE Commander Operations laid a wreath on behalf of the submarine service. Also in attendance were Commodore Ames Perks Deputy Rear Admiral Submarines and Commodore Bob Anstry Deputy FOSNI. The service was conducted by The Reverend Paul Jupp, honorary chaplain to the Submarine Association.
Posted by R N A. CHAIRMAN/P R O at 06:43