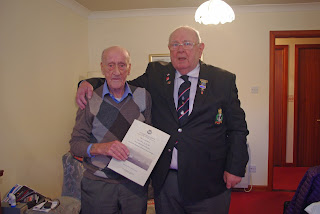 The City of Glasgow Branch were requested to visit an ex sailor who has reached the grand age of 100 years on 4 November 2017. Alec Collins Ab, served in the RN from 1940 -1945 signing on at Skegness and served on HMS Iona, Arbona, Robina and Drummerboy. After his demob he went back to his trade of tailor until he retired. S/m's Kenneth McKinnon (Chairman) and David Carlin (Treasurer) called at his home where S/m David presented him with a certificate from the branch on achieving a spritely 100 years of undetected crime. He was also presented with a bag of RNA goodies with an invitation to meet the members of the branch on our next meeting.
Posted by R N A. CHAIRMAN/P R O at 11:26