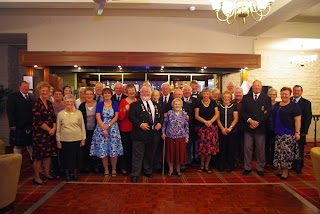 We celebrated Nelsons victory over the Franco/Spanish fleet at Trafalgar with a dinner in the Arrochar Hotel. The manager David Cummings is ex navy and procured a bottle of Pussers for the toast to Nelson and those who fell with him. After the meal and speeches we had a raffle which raised a goodly sum. The speech and toast was given by S/m Brian Mackenzie. The meal was excellent and afterwards we adjourned to the bar where entertainment was laid on and many a singing ginger was consumed. All in all a very good weekend was had by all who attended.
Posted by R N A. CHAIRMAN/P R O at 11:04