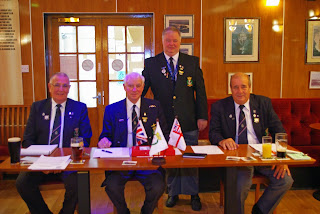 On Saturday 21st we hosted the Scottish Area Meeting. The committee was chaired by S/m Brian Mackenzie (Glasgow Branch), George Lees (Secretary), Graham Rigby (Treasurer) and Mike Heskith National Council Member). In Total the meeting was attended by 21 delegates and observers. The meeting was also attended by WO Gary Nicholson from Faslane who is a representative of the RNRMC (Royal Navy Royal Marines Charity) who gave a talk on what the charity does for those still serving and for veterans and families. Many thanks to S/m Joan Lowe who organised the lunch and to S/ms, A Cox and A McKinnon for their assistance on serving the lunch.
Posted by R N A. CHAIRMAN/P R O at 04:04