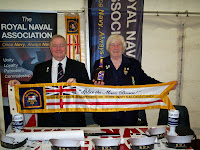 On 30th June was Armed Forces Day where we had a stall set up in George Square which was manned by S/ms Joan Lowe, Frank Hart and our chairman Kenn McKinnon. On the stall we had gizzits for the public in the form of hats for the kids, stickers for cars with a rum barrel for adults which went down very well. S/m Eddie Pollar assumed command of our members who took part in the parade and marched from Holland Street to George Square. A big thank you to S/m Kenny Grieves for acting as standard bearer. After the parade there was a civic reception in the city chambers. Many thanks to all who attended
Posted by R N A. CHAIRMAN/P R O at 03:00